Volunteers on this team: 37

This team is responsible for monitoring all vegetation on the project site.

Purpose:  The purpose of the monitoring is to determine the establishment success of the various species of herbaceous and woody plants used in the restoration effort and to recommend species and planting techniques to be used in future restoration phases.

Protocol:  This procedure is intended to be executed by an experienced biological technician with the assistance of a volunteer.  The volunteer will receive on the job training.

The sampling team consists of an observer and a recorder, although both functions could be completed by the same individual.  Upon arriving at the sample plot, the team lays out a 5-m by 5-m grid across the entire sample plot with small flags inserted at each 5 meter corner.  The observer moves through the plot identifying every woody plant within each 5-m by 5-m subplot and noting whether the plant is alive or dead and derived from nursery stock, a cutting or a natural recruit.  The recorder documents the location, species, and status of each woody plant on the data form map.  The recorder tallies the number of woody plants and recruits for the sample plot. 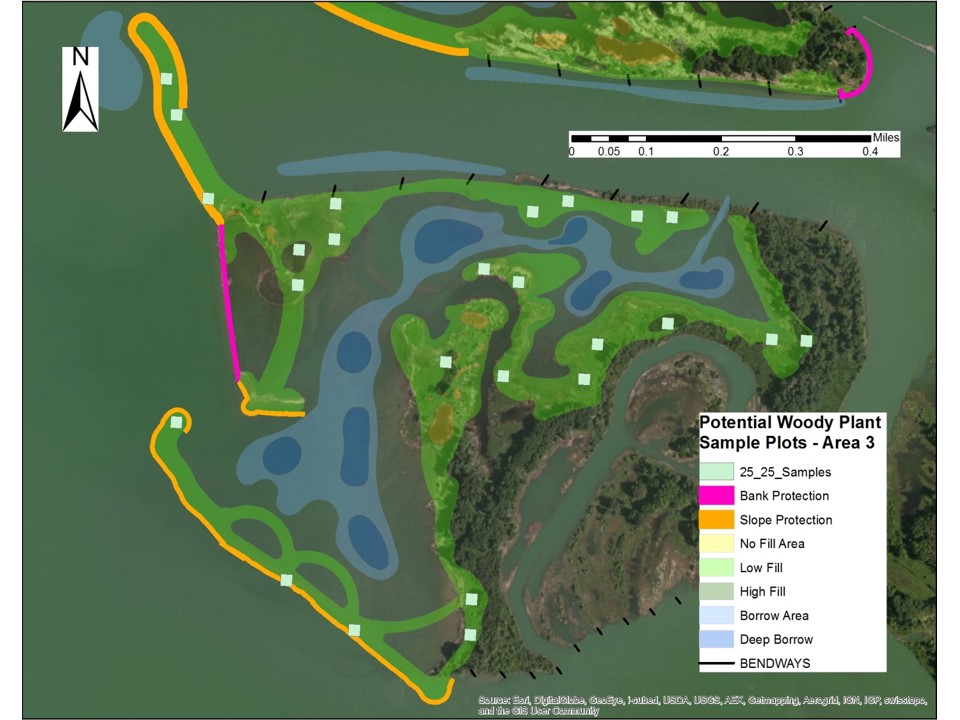 Purpose:  One of the goals of the restoration project is to promote diverse native riparian vegetation growth.  The vegetation diversity monitoring will measure progress toward that goal.

Timeline:  Sampling will be conducted in the pre-construction year and then year 1, 3, 5, and year 10.  Sampling will be performed during the summertime when the phenology is best for identifying plants to species.  Samples should be run about the same time each year for comparative purposes.  Specific sampling times have not yet been determined.

Protocol:  This procedure is intended to be executed by an experienced biological technician with the assistance of a volunteer.  The volunteer will receive on the job training.  The volunteer does not need to be able to identify plants but should have a strong interest in plants.  This is a great opportunity for the volunteer to learn numerous plants.

Data collection team consists of two individuals—an observer and a recorder.  Sometimes the same individual may perform both functions.  Data for each sample is collected along six 22-meter transects (one each at compass heading of 0o, 60o, 120o, 180o, 240o and 300o) (Figure 1).  A separate data collection form (example attached) is completed for each transect.  Each transect consists of 40 observation points therefore the total sample consisted of 240 points.  A metric measuring tape is stretched out on desired heading for 22 meters.  The observer identifies all plants species intersecting an imaginary vertical line at each half-meter point along the measuring tape (beginning with 2.5 meters and continuing to 22 meters).  Multiple species are often identified at a single point.  For example, a single point may have several overlapping tree species, shrub species and herb species.  The plant species were recorded in height position order such that the species at the top of the vegetation was recorded in the first column, while the second level species was recorded in the next column, and so forth. 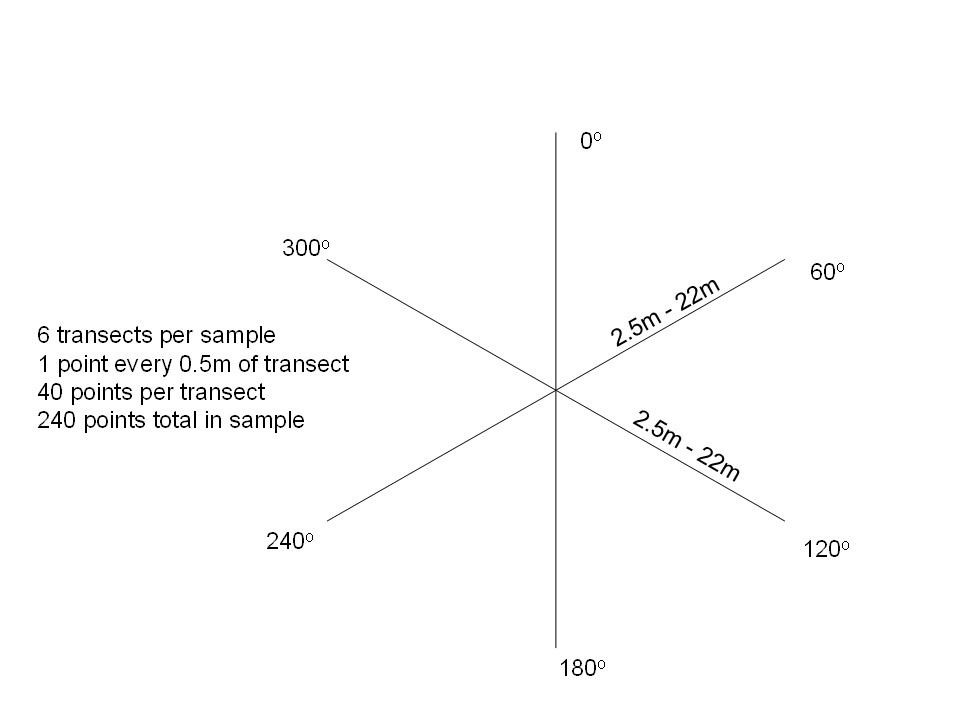 At each transect sampling point the observer notes the type of soil covering.  The observer notes if the soil was covered by litter, moss, woody debris (greater than 5 mm diameter), rock, or was not covered (bare soil).  The recorder enters the appropriated code (L for litter, M for moss, W for woody debris, R for rock, and S for bare soil) for each point on the data collection form.correct identification.  All six data collection forms (one for each heading) for the sample are attached together.