Volunteers on this team: 6

This team is responsible for monitoring the small mammal community on the restored areas.

The small mammal community is an important component of biological diversity in most ecosystems.  Small mammals act as seed dispersal agents, their burrowing disturbs soil and creates microsites for seedling development.  Small mammals also provide a prey base for higher trophic level consumers.

Small mammal populations will be sampled by using the methods developed by (Hallett and O’Connell 2009) removal by trapping on a 9 x 5 grid centered at each sample point and 12 meter spacing.  Trapping will be conducted for three consecutive nights yielding a total of 270 trap nights per sample point.  Data recorded for each specimen include:

Positive species identification will based on skull morphology and DNA.

The Clark Fork River Delta is located at the mouth of the Clark Fork River where it empties into Pend Oreille Lake in northern Idaho. A mosaic of islands was formed here long ago as the river slowed when confronted by the lake and released its suspended substrates. Annual spring runoff once separated the islands into the classic alluvial fan delta landscape and provided a very valuable habitat for many wildlife species for thousands of years. The subsequent damning of Pend Oreille Lake has caused overall lake levels to rise and fluctuate unnaturally.  This has contributed to severe erosion to (or complete loss of) these valuable islands over time.  An effort is now underway to rebuild, bolster and re-vegetate this delta complex back to its near original glory for the good of both wildlife and mankind.

Our first objective was to inventory and survey small mammal populations on those islands that are planned to be physically restored and historic vegetation re-established.  Methods were designed to detect what species are there, determine what habitat types they occupy, and obtain an initial relative abundance index for those species.  Our second objective was to continue to survey and monitor the change in relative abundance (trends) of those species (and new species detected) with a catch per unit effort analysis over a five year period. We also made an effort to detect the presence of larger mammals inhabiting the delta and will monitor their use here over the five year period as well.

Area 3 of this island delta complex was chosen to undergo the initial restoration efforts, so we chose the most representative segments of Island 3 to kick off our small mammal surveys. We chose two segments of Island 3 separated by open water; Island 3 North and Island 3 West. Both island segments are dominated by Reed Canarygrass (Phalaris arundinacea), Black Hawthorne  (Crataegus douglasii) and Black Cottonwood (Populus trichocarpa).  Four main habitat types were observed:

Reconyx, Moultrie and Browning motion cameras were also deployed on Island 3 North, Island 3 West and Island 7 in an effort to detect larger mammals inhabiting these islands. A skunk tincture based scent lure was used to attract mammals to each camera trap.

A linear deployment of Museum Special traps was the chosen survey method.  This method allows for the most thorough survey of each island segment and its four main habitat types, but also ensures that traps will intersect a maximum number of small mammal runways and ecotones that small mammals regularly use, especially voles. August was also chosen as the month to conduct these surveys due to our knowledge that multiple litters per summer are produced by small mammals and that their populations peak by the end of each summer.

All traps were checked, captured animals collected, and traps were re-baited and reset each morning. A trap night is defined as one trap, baited and set to catch small mammals over night – whether anything was caught or not by morning. Trap trips and/or trap re-baits with no captures were NOT corrected for as ½ trap nights. 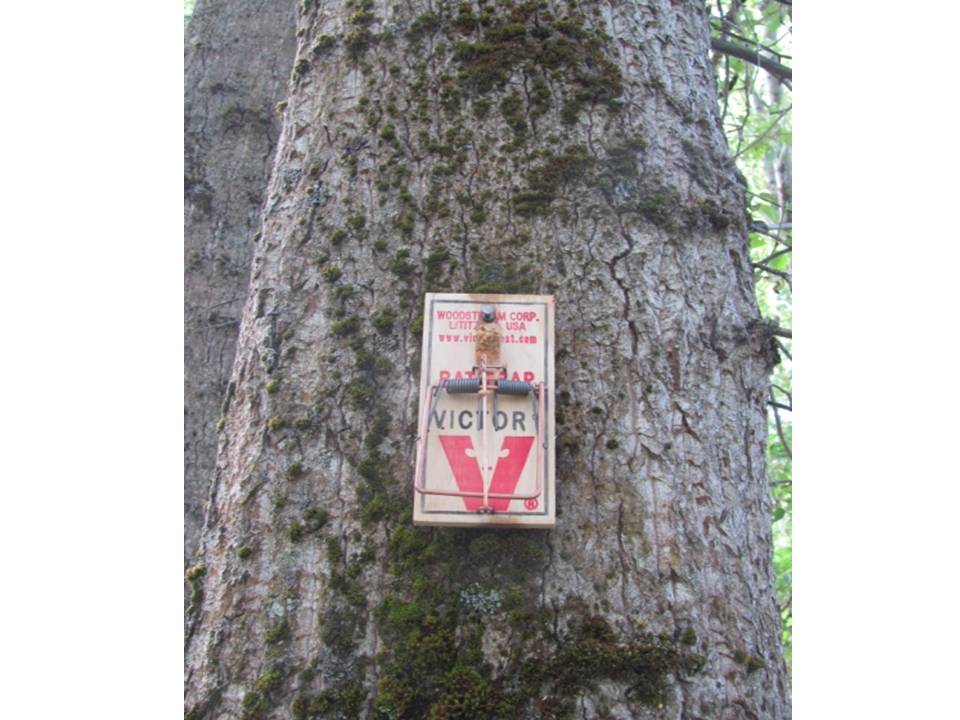 The entire trap night effort for capturing small mammals in area 3 was 1, 040 trap nights. When attempting to capture all species present and obtain a relative abundance index for small mammals in a given area – a goal of 1,000 trap nights will give optimal confidence that the data collected accurately represents reality. Therefore we feel that we now have a solid initial index of small mammal relative abundance in area 3 and this index will be useful in long term population trend analysis as this area is restored.

Our crew mantra of “No trap left behind” was upheld except for one arboreal small mammal Victor rat trap that was absconded by a Black Bear (Ursus americanus). Therefore, we were able to check all traps set each day during the survey, except one. We assume the bear preferred the peanut butter/oat mix alone instead of an arboreal small mammal.  Evidently our bait mix is very attractive to banana slugs as well? We caught 64 banana slugs during the survey in our Museum Special traps. We saw and heard ONE Red Squirrel (Tamiasciurus hudsonicus) on Island 3 West in a very small grouping of coniferous fir trees.  We saw elk and white-tail deer tracks and raccoon and coyote scats.

Summary
Area 3 of the Clark Fork River Delta currently has a very limited array of vegetative diversity. Reed canarygrass is the dominate vegetation and out-competes many important native plants, shrubs and trees that could support a greater diversity of small mammals. Therefore, it is not surprising to only find evidence of four small mammal species (Vagrant Shrew, Meadow Vole, Deer Mice and Red Squirrel) inhabiting this area. It is also not surprising that these small mammal species are present at such relatively low population levels. It appears that on these delta islands, small mammal diversity is strongly linked to habitat diversity.