Volunteers on this team: 15

Background:  A large number of birds, some of which are permanent residents, are found in and around Lake Pend Oreille.  The area is a major stopover location for migratory waterfowl in both spring and fall.  Numerous species of birds, including upland game and birds of prey, nest near the lakeshore.  During the past century birds have represented the primary focus of a majority of ecological and evolutionary research efforts, providing critical insights into our current understanding of natural processes at the individual, population, and community levels (Wiens 1989).  This document describes a study design for inventorying and monitoring of avian species throughout the delta project area.  A mixture of professionals, citizen scientists, and volunteers will collect data to help determine:  1) What species are present during the breeding season?  2)  How does species composition change throughout the year? And 3) How does species composition and abundance change through time?   Additionally, data should be obtained on species’ distribution, habitat associations, and relative abundance.

Objectives:  The objectives of the proposed effort include:

Sampling Methods:  A combination of terrestrial and open water survey methods will be performed.

Point count surveys are one of the most common survey methods for terrestrial bird communities.  The basic procedure establishes stations either randomly or systematically throughout the area of interest.  Stations will be possibly up to 400 meters (m) apart to minimize double-counting of birds among stations and to maintain independence of data collected at each station.  Point-counts are typically conducted as ‘fixed radius’ (e.g., all birds < 50 m are recorded) and survey length can be from 5 to 10 minutes at each station.  Counts should not be conducted during periods of rain or strong winds (> 15-20 mph).  Professional ornithologists may be aided by citizen scientists and volunteers for these surveys.

The following steps should be followed (Guilfoyle and Fischer 2007):

At the end of each count, recordings of bird detection are stopped.  Do not record any new birds seen or heard after the sampling period was over (incidental observations can be recorded, but should not be entered or included in analyses).

Move to next station.

Area searches can be conducted by volunteers with data upload to eBird online.  The goal with these area searches will be to enhance data collected during the breeding season point counts by gathering data at intervals throughout the year.  Our hope will be to recruit active birders to volunteer to conduct informal areas searches and upload their observations to eBird.  This will generate more complete lists of bird use throughout the annual cycle in each area. It will also provide an opportunity for public involvement and “ownership” of the work occurring within the Delta.

Area searches are typically conducted by surveying or walking through an area using a consistent pace.  The surveyor is not limited to staying at a point or walking a specific trail, but is free to roam through the area and to detect as many bird species and individuals as possible.  This method is useful for nest searches and is generally used only to obtain a species list and presence/absence data.  We would aim to have area searches conducted at two month intervals and, as long as effort is consistent among different areas, statistical comparisons are possible for species richness and abundance.

Line transect or drift line transect surveys will be performed by professional ornithologists aided by citizen scientists and volunteers in the open waters of Lake Pend Oreille.  Transects will be recorded via GPS coordinates.  Transects may be as small as 100 m or may be several hundred meters in length.  Like point-count surveys, birds are typically placed into various distance categories on either side of the observer.  When assessing detectability indices or density, the distance to each bird detected is often estimated or measured directly (typically using a range finder), rather than placed into distance categories. 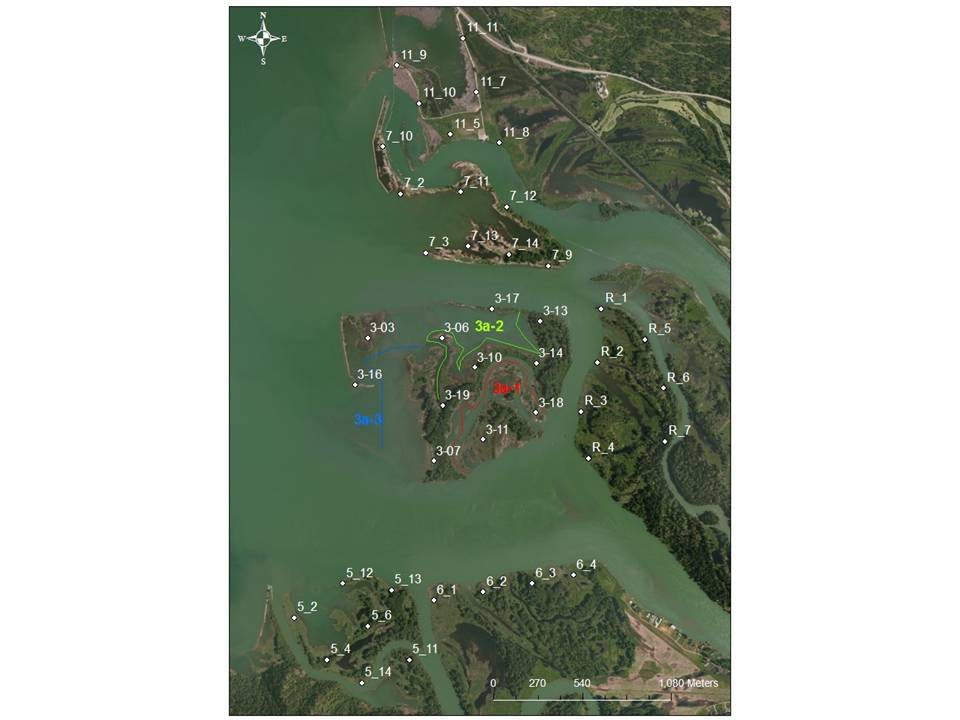 Timeline:  The timeline for this monitoring effort is as follows:

From June 5th to June 9th we conducted standardized bird surveys in the Clark Fork River Delta and we briefly summarize results here.  We conducted standardized point count surveys at 43 point count stations spread across six distinct survey areas and also established and surveyed three aquatic bird transects in Area 3.  We distributed survey points such that at least 250 meters separated any two adjacent stations in order to saturate the survey areas with survey points but also minimize counting the same individual birds multiple times.  Thus, we primarily present the number of birds detected within 125 meters of each survey station but also show numbers for all detections. 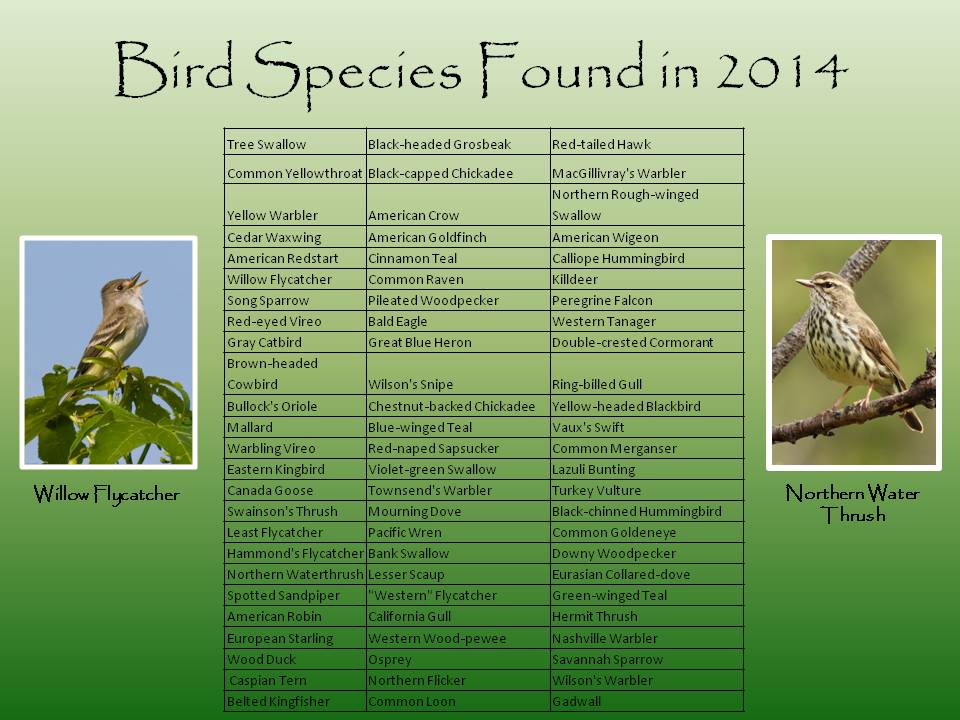 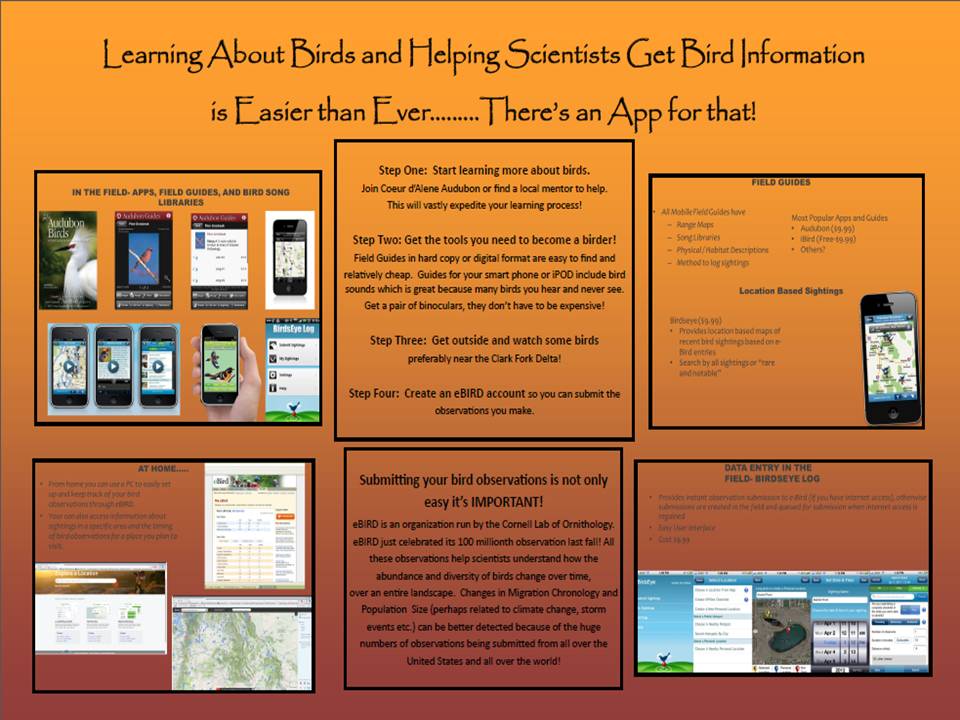 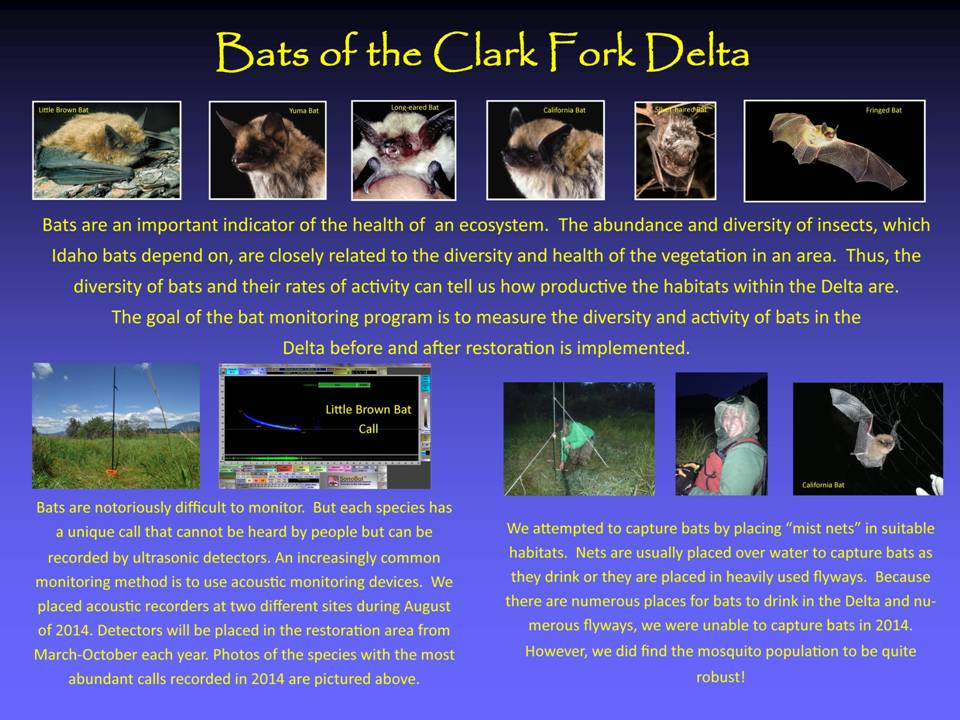